Vanity: its first known use in the 15th century is derived from Anglo-French vanité and before that the Latin, vanitas, which means “emptiness, lack of judgment, foolish pride”; or vānus referring to “empty and lacking content”1. Vanity Fair, the novel of the early 19th Century, satirising British society then and later it became the title of the magazine by the same name (from 1913 with reprints in the 1980’s); a vanity/dresser to sit and apply make-up at; or a wash basin.

Vanity is a reference to our obsession with superficial or temporal concepts of beauty. The multi-billion-dollar fashion industry, “accounting for 6% of global consumption and growing steadily”2 echoes ‘the dream’ that capitalism is based on and the “emptiness, lack of judgement and foolish pride” that this concept encapsulates.

Giulia Mensitieri, social anthropologist and author conducted her investigations/research over four (4) years. Her findings are captured in her book, The Most Beautiful Job in the World toting chapter headings such as: Fashion and Capitalism: a system for producing the dream; and The dream and those who work in it. Her investigations attest to the industry’s reliance on unpaid or low paid work not only in the sweatshops of production, but in terms of most of the freelance-type work the industry relies on. Many are not paid, while ‘the few’ benefits substantially from the spoils of this ‘fashion fiesta’ industry that is built on desire and notions of power and perfection – capitalism personified.

The work, The Allegory of the Vanity of the Plastic Spoon, considers ‘the garment’ in this instance not as an essential body covering, but rather as an act of vanity – an indicator of a consumer-based society. The work traces this idea back to the allegorical vanity paintings of the 17th Century [e.g. FIG: 02] which were subtle warnings that spoke of excess, depravity and over-indulgence in the church and society – its leadership being the most prolific in this instance. The desire for immediate satisfaction and knowledge is embedded in these paintings and is equally recognisable in our contemporary society. We just don’t call it that. We call it economic growth. Growth itself is not an issue, though there are, of course enormous imbalances where that is concerned. The title of the work/the work itself imitates and draws attention to this self-same sense of opulence, temporal satisfaction and desire; hinting at ‘the ridiculous’.

The garment is created out of a base of plastic sheeting, with a wire framed undergarment and ‘used’(recycled) plastic spoons; as well as some knives and forks [Fig:01] collected over time from the beaches in Durban, South Africa and from donations given by family, friends and visitors to the Dreams as R-evolution site3. The (plastic) spoon, much like the garment itself is weighted by the metaphor of consumption, desire,…used and discarded and of excess; with references to eating and been eaten, laced as it is with sexual desire. All desire is of course illusory and unattainable for most. Our hopes and dreams are often pinned upon these desires, ensnaring us in the cyclical madness of ‘want’ and ‘more’.

Vanity and fashion and consumer motivations towards the desire to have, to own, to consume, dressed under the veneer of power, of attainment… to have more…and more… 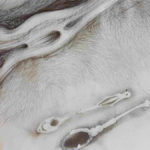 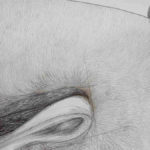 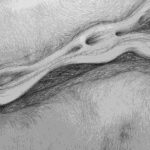 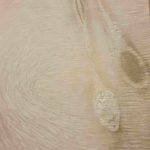 (this creative piece below based on the work was prepared for the Critical Food Studies site – https://www.criticalfoodstudies.co.za/the-allegory-of-the-vanity-of-the-plastic-spoon-by-coral-bijoux/)

The desire to be exits in a frame that is articulated through the self. Self-hood at a time when the collective tends to choke you into being one. One what? As a female, femme, feminist, woman; my womanhood is defined by acts of sacrifice and motherhood dressed up as giving up all for the dream of nurturing: clean up, cook up and being-existing entirely for ‘the other’. (Mum, is it ready?!)

My body of work looks deep into the eye of domesticity, entrapments, containment and areas that so many spend their time (and money) amongst other things, where the fleece lined captivity in the “I Do” space (of choice?) is defined in acts of loving-ness. This state where your love is sought by doing – these tangible blessings in pots with spoons and scoops of delicious nothing-ness. Loving titbits of love.

In spaces of transition, defined roles turn aside and inside out in acts of reframing: a questioning and a search for alternate ways of being.

The Dreams as R-evolution body of work considers that the struggle to assert our identities lies in every encounter – be it politically or socially. Grappling with content, statues and spaces, we jostle over who has rights and who doesn’t. We venture into spaces that are both personal and defining – the home, surrounded as we are by our domestic definition. Mother, woman, mum, social sacrificial lamb. Delicious roast lamb. I often wondered at the notion of ‘lamb’, the sacrificial metaphor and its association with ‘The Universal Church’? Lamb of God. Sacrificial lamb. Innocence roasted.

The ‘get up’ in Dreams as R-evolution’s Allegory of the Vanity of the Plastic Spoon, is a spooned (and forked) ensemble of plastic, dished up as a Boel4 allegorical Dutch-ed re-formed (circa 1660) form; a contemporary garment (circa 2019-2020) commenting on a Colonial past where women who were once covered in lavished adornments that kept them from free strides and kitchens where maids abound to serve the privilege space. The ‘plasticity’ is found and collected from sea-d debris and bottom drawers from homes with thoughts that “one day we may need it to be used as camp out in bush-tented bourgeois faux domesticity”. This domestic utterance is a space where meals are seldom rare and are tended with smothering’s of comfort imbued with delicious aromas from innards and waste-not, want-not bits; roasted to perfection and served on paper, plastic or tin in the heart of choice or bearing the brand of survival.

The proverb, “born with a silver spoon in the mouth” references privilege and inherited wealth. The narcissistic silver spooned affliction5 that becomes an arguable defence of privilege. While in acknowledgement of these multiple mindsets, I reference plastic spoon as the place and space of ‘functional’ bliss. The lower-down-dregs of us who can re-use and re-cycle to our hearts content that which is given so freely. So accessible is the plastic, that it need not be an inheritance, though it is well placed to be so, surviving where it will for hundreds of years and where it floats fantastically freely across generations into a near and distant future, choking on our inability to taste a fresh sole. Found riding the crescent waves at sea or decorating a picnic tabled blanket or discarded at sites under bridges at dusk with breyani hand-outs; the plastic spoon makes its mark while it floats to distant lands where perhaps roast lamb is consumed with silver spoons.

Dressed in spoons of plastic, weighted down by the implications of roast lamb without a sole in sight and a substantial serving of innocence, the wearer becomes the next generations’ witness of that which we have served up to an uncertain future and a questionable past.

4 Pieter Boel – a Flemish painter who created the Allegory of the Vanities of the World, 1663.

Click to view the full set of images for the Dreams as R-evolution project.